I love when I get FFF Friday submissions from people like Darlena (whose blog, Tales of an Unlikely Mother, is fantastic) because they manage to express sentiments that I’ve clumsily attempted to impart, in such a unique, poetic way. This is another story about multiples and feeding difficulties, but Darlena’s perspective on the subject of formula feeding is really quite singular.

***
It’s 3 p.m.  My month-old twins are crying, but they are so tiny – their lungs so weak – that their little cries sound like a few quiet ducks quacking in the distance.  They are hungry, of course.  They are always hungry.
For some reason, they missed the memo on how babies are supposed to eat.  That memo probably comes out at 36 weeks, to give the unborn some quality reading before they make their way out into the world.  With a whole month to digest the information, maybe babies born at 40 weeks have properly studied the technique and are sucking geniuses right off the bat.  That’s all conjecture, of course; I could be totally off base.
It’s more likely that, being born at 34 weeks, my babies had other developments they were working on – like keeping their temperature up, so they didn’t fall into the dreaded ‘failure to thrive’ category.  We stayed in the hospital for ten days while they concentrated on that and gaining weight.  I saw lactation consultant after lactation consultant, nurse after nurse, doctor after doctor.  No one could make my babies latch.  We fed them via finger tubing for the first few weeks.  I pumped and pumped.  Finally, we moved them to bottles of pumped milk, all while I continued to try to put them to the breast. 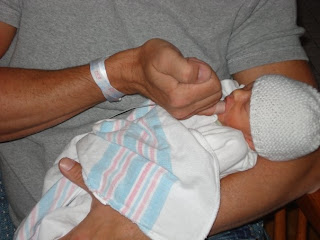 At 3 p.m. on this particular day, I was attempting a taking-turns system.
My husband would feed one baby a bottle of my pumped milk; I would take the other baby into the bedroom and try to breastfeed until we were both so frustrated and exhausted that we were both crying by the time I gave up and made a second bottle of pumped breast milk.
“Which one is going to be the hungry baby this time?” my husband would joke.
At one month, my babies weighed maybe six pounds.  They were not gaining weight.  How could they when I made them burn all of their calories by wriggling and crying and fighting with me before I let them eat?
Eventually, I stopped trying to get them to drink from the tap.  I became an exclusive pumper, and I spent the rest of my maternity leave strapped to a machine.  My skin bruised and tore.  My babies were still hungry.  My supply started to diminish.  My babies were still hungry.  When I had to go back to work, my babies were still hungry.
The day I bought that first can of formula marked a parenting low for me.  I had never felt like such a failure at anything in my life.  I was giving up.  I was choosing convenience over my kids’ health.  I was failing them already.
That feeling lasted for about a week, until our next well visit.  The babies had gained almost a pound.  At three months, they were able to move out of preemie and newborn clothing.  Most importantly, their little duck cries were subsiding.  For the first time in the three months they had been alive, they weren’t hungry.
They gained a pound the next week and the next.  They gained and gained, and I never looked back.  What I thought of as failure was actually success.  My beautiful little bags of bones were filling out.  They were happy.  They were well fed.  And they were loved.
That’s our story.
The sad thing is, I shouldn’t feel the need to tell it.  I shouldn’t have to type up 600 words to explain to people why I chose to formula feed. I shouldn’t have to start out the story by showing everyone how very hard I tried to breastfeed first.    I shouldn’t have to excuse my actions or decisions.
In an ideal world, a formula feeder would be able to boil my story down to this: I formula fed my children.  No, I take that back.  In an ideal world a formula feeder would be able to boil my story down to this:  I fed my children.
Because, really, what else does anyone need to know?
***

Share your story for the FFF Friday series. Email me at formulafeeders@gmail.com

Suzanne Barston is a blogger and author of BOTTLED UP. Fearless Formula Feeder is a blog – and community – dedicated to infant feeding choice, and committed to providing non-judgmental support for all new parents. It exists to protect women from misleading or misrepresented “facts”; essentialist ideals about what mothers should think, feel, or do; government and health authorities who form policy statements based on ambivalent research; and the insidious beast known as Internetus Trolliamus, Mommy Blog Varietal.

Suzanne Barston – who has written 602 posts on Fearless Formula Feeder.

43 thoughts on “FFF Friday: “I shouldn’t have to excuse my decisions.””

"My parents can"... FFF Infant shirt by FFFApparel
Custom t-shirts online at zazzle.com